Although Schull’s Blue House Gallery is a gallery of contemporary art, showing an annual program of local and Irish exhibitions from Easter to September, in August of 2018, it will stretch its remit to host an exhibition of Continental and British art assembled by the late Alice Schwab who arrived in London in 1937 as a 22 year old Jewish refugee from Nazi Germany. Throughout her life she collected art, befriended and supported artists and, following her death, her daughter Julia Neuberger, Rabbi and Member of the House of Lords, established the Alice Schwab Trust in order to support refugees and asylum seekers pursuing higher education. While refugees continue to flee their troubled homelands, assisting the dispossessed to move on in their lives seems close to an essential duty for all concerned and compassionate individuals today. All sales from the exhibition will go to support the Alice Schwab Trust.

There are many printmakers in this intriguing collection, including two of the major stars of British art during the second half of the 20th Century, R.B.Kitaj and David Hockney. Both are represented by etchings. Their contemporaries; Adrian Heath, Denis Bowen, Peter Coker, Vicki Slowe, Peter Baer represent the vibrant printmaking culture promoted in London by Editions Alecto. Celebrated names, but from earlier in the century, are John Piper, David Young Cameron and Blair Hughes-Staunton. Piper was a casualty of World War II while Cameron, the highest price printmakers in Britain, was a casualty of a different kind, his prices being hit by the Wall Street Crash of 1929. The Hughes-Staunton wood engraving ‘Deserted Theatre’ is an exquisite example of a master printer at work.

From Alice Schwab’s German and Continental background are gathered a different body of artists, influenced by the concerns of art in Germany, Austria, Czechoslovakia in the years leading up to World War II. Amongst these are individuals who survived to flee to safety, most notably Jehuda Bacon who, as a 14 year old was sent to Auschwitz. Austrian artist Margaret Kroch-Friedman studied under Oscar and is represented by two small but powerful pieces.

Among important French art developments of the Post-Impressionist period, Les Nabis is represented by a beautiful drawing by Henri Ibels, while there are other fine drawings by Eberhard Werner, Lotte Reisenstein and Archibald Ziegler.

Art with a European consciousness of the first half of the twentieth century has not, with some notable exceptions, penetrated the circle of Irish art collectors where the hallowed halls of the RHA still prevail. The Alice Schwab Collection presents an opportunity for viewers to appreciate a remarkable body of works-on-paper by a distinguished body of artists who were involved in the turmoil of the times.

Showing in parallel in the upstairs Gallery will be a complimentary exhibition, Masters of Contemporary Printmaking, bringing to Schull some of the most accomplished artists associated with Graphic Studio Dublin, the oldest and most significant print studio in Ireland, including Grainne Cuffe, Jean Bardon, Yoko Akino, Ruth O’Donnell and Marta Wakula-Mac, who combine technical mastery with pure beauty.

A print by celebrated UK artist David Hockney is to be included in the forthcoming exhibition, the Alice Schwab Collection, at Blue House Gallery, Schull from
August 17 - 31. Hockney, the most famous living English painter, is unique among his contemporaries in being equally admired by the critical world and the general public. Since he left the Royal College of Art in the 1960s, Hockney has been an important and prolific painter, printmaker, illustrator and stage set designer, working and living for many years in the United States and his recent major exhibition at the Royal Academy in London was an outstanding success. 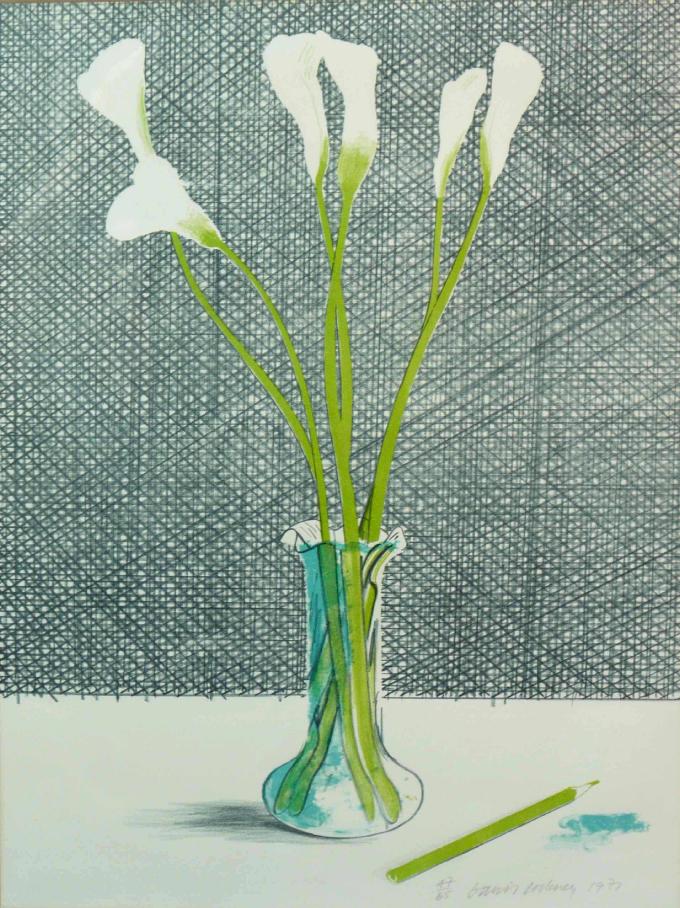