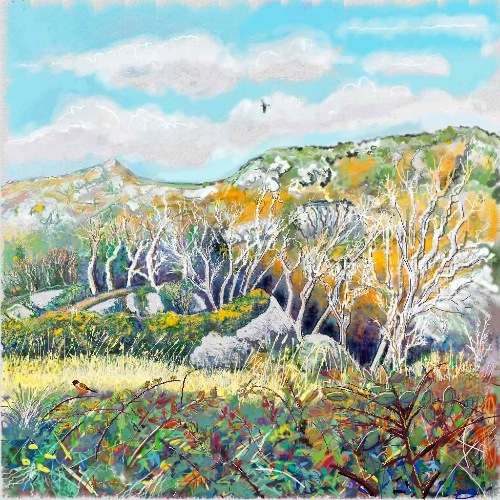 Peter Wolstenholme, BA, ATD, studied Fine Art and Ceramics at Sheffield College of Art, 1963-68, and then lectured at Rochdale College of Art 1968 - 73, where his work as a sculptor won him First Prize in the Daily Telegraph "Young Sculptor of the Year" with his work exhibited at the Royal Academy, London.

In 1973 he moved to West Cork, and ran the very successful Courtmacsherry Ceramics with his wife Fran until 2010. During this time his work has been commissioned by the Taoiseach for presentation in America, and his work has been presented to three Irish Presidents.·

His porcelain art pieces were avidly collected and soared in price towards the end of the pottery's production.

Since 2010, after working in a studio for almost forty years, Peter has been creating prints and paintings outdoors.

Much of his time is spent painting and birdwatching in the Mizen area.

His work is subjective and dynamic and is permanently on Show at Courtmacsherry Ceramics Gallery.
Open by Appointment